(Article reprinted with permission from IMSA.com) 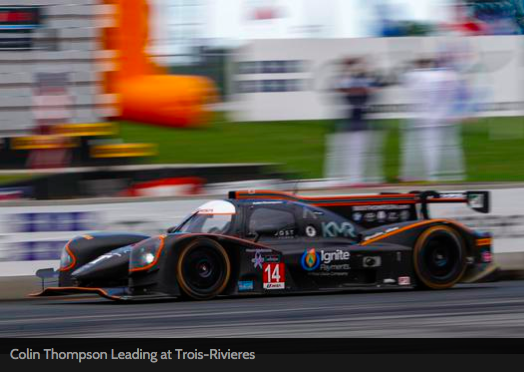 A tough, hard-fought season comes to a close at Road Atlanta this weekend, in the inaugural year of the IMSA Prototype Challenge Presented by Mazda, a series that debuted in March at Sebring International Raceway, and since then has competed on some of the most famous race tracks in the U.S. and Canada.

The championships will be decided at Road Atlanta as part of the Motul Petit Le Mans weekend, where the IMSA WeatherTech SportsCar Championship, as well as the IMSA Continental Tire SportsCar Challenge series will crown their respective champions.

The IMSA Prototype Challenge Presented by Mazda combines the proven Mazda Prototype Challenge cars – open-cockpit racers using the Elan DP02 chassis, produced by a company based near the track in Braselton, Georgia – and the brand-new, closed-cockpit LMP3s, a class developed in Europe and built by any one of six manufacturers approved by the ACO, the sanctioning body for the 24 Hours of Le Mans. The LMP3 class competes globally using the same specifications everywhere.

Though the MPC and LMP3 cars race together, they are competing for separate podium finishes and season championships. In fact, there are two other races going on as well: Both LMP3 and MPC have their own Masters championship, created for drivers aged 45 and above.

Champions in all four will be crowned after the second race this weekend at Road Atlanta. One championship has already been decided, but others remain up for grabs.

In LMP3, the championship points lead has been a battle between Colin Thompson, the West Palm Beach, Florida driver of the No. 14 Kelly-Moss Road and Race/Ignite Norma M30, and Kenton Koch, the former series champion from Glendora, California, at the wheel of the No. 8 P1 Motorsports Ligier JS P3.

Thompson, driving the only Norma in the field, has been fast and consistent all season, but he has only two wins, while Koch has five. So why does Thompson lead Koch 185 to 167 points entering Road Atlanta? It’s largely because Koch, who has a class victory at the 2016 Rolex 24 At Daytona on his resume, wasn’t able to finalize his deal with P1 in time to make the Sebring season-opening doubleheader, so he has had to drive especially hard to make up for those lost points.

Koch and Thompson have indeed dominated, but the rest of the field certainly hasn’t made it easy on them. Naj Husain, of The Plains, Virginia, raced here in the Lites series last year, and moved up to the LMP3 class at the beginning of 2017, and he’s been very strong in the No. 3 Extreme Speed Motorsports/Cloudistics Ligier, especially the last half of this season. He is third in overall points with 138, and Husain has also clinched the LMP3 Masters championship, over Paul Fix, who presently ranks second in Masters competition.

Also making some solid moves late in the season is Louisville, Kentucky racer Matthew Dicken, driver of the No. 4 ANSA Motorsports/Strategic Wealth Ligier. Dicken will likely lock up at least a fourth-place finish in the LMP3 championship this weekend.

Meanwhile, in the Mazda Prototype Challenge class, one young driver has had a dream season, building a points lead that guaranteed him the class championship. But don’t expect Kyle Masson to take it easy – he has something to prove at Road Atlanta.

A year ago, the Windermere, Florida driver Masson didn’t have a good weekend, finishing 13th?in race one, 12th?in race two. Masson must have done his homework during the offseason, as he started the year with a class win in his debut at the Rolex 24 At Daytona, then came out of the box at Sebring with two MPC victories, and went on to take nine of the 11 races thus far this season.

Masson’s No. 18 Performance Tech Motorsports/Neurospine Institute entry has been the class of the field this season, but Kris Wright would be the first to tell you he isn’t unbeatable. Wright, the Pittsburgh, Pennsylvania driver of the No. 7 JDC Motorsports entry, was the one who first upset Masson’s win streak, and he has three other podium finishes this season.

But certainly, the most frustrated driver in the Mazda Prototype Challenge field must be Tazio Ottis of Alameda, California, who has had a solid, consistent season, but not the results in his No. 72 JDC Motorsports/Ottis Racing entry to challenge for the championship. Still, Ottis is just one point behind Wright in championship points.

Another driver worth noting is also named Masson, but this would be Robert Masson, also of Windermere, Florida, where his son Kyle lives as well. Robert, a surgeon, has been improving all year as a racer, and finds himself in a tight battle for the MPC Masters championship with Aberdeen, Scotland’s Stuart Rettie, driver of the No. 21 ODU Motorsports/Lion Rampant Group car, and Libertyville, Illinois’ Gary Gibson, both series veterans – Gibson won overall in MPC this year at Trois-Rivieres in Canada in his No. 13 Team Perfect Pedal entry. Only seven points separate?those?three drivers in the points coming into Atlanta.

Regardless of which racers are crowned the champions in the IMSA Prototype Challenge Presented by Mazda after the two Road Atlanta races, they will have earned their trophies over a tough season of tight competition. With nothing to lose and everything to gain for many of the drivers, expect some close, give-no-quarter competition this weekend, as Road Atlanta’s complex 2.54-mile circuit rewards bravery – up to a point.

The IMSA Prototype Challenge Presented by Mazda will hit the track for practice Wednesday and Thursday, then will qualify Thursday afternoon at 12:30 p.m. ET. Race one is set for 4:35-5:20 p.m. ET Thursday, with race two scheduled for Friday from 9:25-10:10 a.m. ET. Live timing, scoring and race coverage will be available on IMSA.tv, and a delayed broadcast of the races will be shown on FS2 Thursday, Oct. 26, at 8 p.m. ET.? The broadcast will also be available on YouTube 24 hours after it airs on television.

(Article reprinted with permission from IMSA.com)