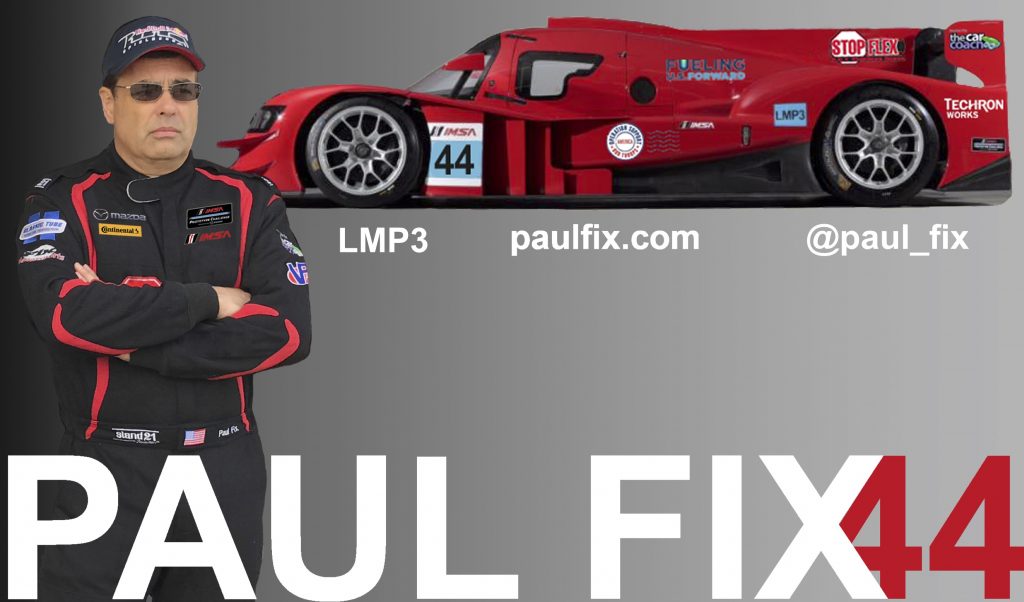 Williamsville, NY ? (March 13, 2017) Veteran sports car driver Paul Fix will compete in the IMSA Prototype Challenge presented by Mazda in 2017, as driver of the #44 Ave-Riley AR-2 LMP3 car. The series will participate in select events in conjunction with the IMSA WeatherTech SportsCar Championship series. The series will feature a 13-round calendar, starting at Sebring in mid-March and finishing in early October. Nine of these rounds will take place during WeatherTech Championship weekends. Most rounds will have two races of 45 minutes each, in a single-driver format over two days.

For team owner Tony Ave, the decision to acquire Fix as a driver was an easy one. Said Ave, ?Paul drove our works Trans Am cars for the past three seasons and played a large part in helping develop the car to its current point of success in that series and I expect him to lead us in this endeavor in the same fashion.?

Fix and Ave have collaborated for three highly successful seasons in the SCCA Trans Am series where the team accumulated numerous wins, poles, podiums and track records. The team looks to bring that level of preparation and success into the new operation.

Said Fix, ?I am honored to be asked to drive the all new Ave-Riley AR-2 LMP3 car. We are all looking forward to getting on track and experiencing prototype racing in North America. I know that from previous experience, the entire Tony Ave Racing team is behind this endeavor 110 percent.?

Both team and driver have prepared over the winter off season, testing the new car at various locales, both in the United States and Europe. The results have been appealing and show great promise for the upcoming series.

?The car is both fast and a pleasure to drive,? offered Fix. ?I expect we should be on pace for the season of racing. Past experience at various tracks on the schedule will allow us to get a good setup under the car and be in a competitive posture from the moment we unload the transporters.?

Along with Fix?s current sponsors, three new partners have stepped forward to eagerly participate in the new venture. Fueling US Forward, Operation Support Our Troops-America and the Alan J. Lynch Medal of Honor Veterans Program will be present on the sides of the new prototype racing machine.

The first event of the 2017 season is from Sebring International Raceway. Qualifying beginning at 12:30 PM EDT Thursday.? Race 1 for the championship goes green at 4:35 PM EDT Thursday for the 45-minute sprint to the checkered flag. Friday will conclude the week of action with Race 2 set to start at 10:45 AM EDT, for 45-minutes of racing. Fans can follow all the action via IMSA TV at www.imsa.com.

Paul Fix is a professional racecar driver based in New York, he has been competing in the SCCA Pro Trans-Am Series since 2000, started racing in 1992. Fix has several wins, podium finishes and championships in his career.? www.paulfix.com

Classic Tube is a manufacturer of preformed tubing products for the Automotive OE, Aftermarket and Restoration markets. In addition to the Fleet, Heavy Equipment, Marine, Mining and Aerospace Industries. Classic Tube also manufactures a complete line of replacement brake, fuel, transmission and carburetor tubing applications for Cars and Trucks both Domestic and Foreign, from the 1930?s to present.? ClassicTube.com

The Car Coach?, is your go-to source for car care tips and automotive news. Car expert Lauren Fix, The Car Coach is dedicated to educating drivers about vehicle maintenance and repair as well as providing consumers with the latest car reviews, technology reviews, driving tips and auto industry trends. CarCoach.com covers all segments of the automotive and aftermarket industry, including breaking news stories, recalls, government regulations, automotive shows and commentary about the future and direction of the automotive industry. Visit CarCoach.com today!

FUELING US Forward is a non-profit organization dedicated to educating the public about the value and potential of American energy, the vast majority of which comes from fossil fuels. Energy shapes everything we do, every moment of our life??so much so that we often take it for granted. No longer. The story of energy is one worth telling, and one best told by the people who have the most at stake.

TECHRON Concentrate Plus Fuel System Cleaner, with its exclusive formula, is unsurpassed in cleaning the entire fuel system (fuel injectors, intake valves and combustion chambers) in one tankful. Its use can maximize fuel economy and restore lost power, performance and acceleration. See more at TechronWorks.com

Founded by Medal of Honor recipient Allen J. Lynch, the Lynch Foundation joined with Operation Support Our Troops, OSOT, to became part of the program of that organization. OSOT has earned 5 stars on Charity Navigator and has over 10 years of experience in fundraising and charity accounting. OSOT provides general support and insures donations and their use are properly accounted.?The Lynch Foundation organization was founded to create stop-gap measure funding to veterans and their families.

The International Motor Sports Association, LLC (IMSA) was originally founded in 1969 and owns a long and rich history in sports car racing. Today, IMSA is the sanctioning body of the IMSA WeatherTech SportsCar Championship, the premier sports car racing series in North America and the IMSA Prototype Challenge presented by Mazda, as well as four single-make series. IMSA ? a company within the NASCAR group. For more information, visit IMSA.com,? or on twitter @IMSA or facebook.com/IMSA????????