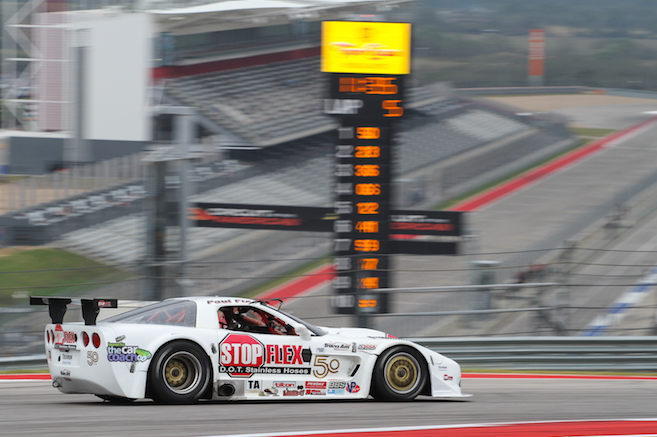 Paul Fix began the day on pole at Circuit of The Americas (COTA) and finished the day on the top of the TA class podium, securing his second consecutive win and fifth victory of the year ? all while capturing the Trans Am championship points lead with one race remaining. In Trans Am’s production classes, Tim Kezman capitalized on the late mechanical misfortune of Ernie Francis, Jr., to secure his second series win of the year; while Todd Napieralski captured his first win of the year and fourth podium appearance.

While there was close competition throughout the TA class field, Paul Fix and the No. 50 StopFlex/ TheCarCoach.com/ Chevron Techron Chevrolet Corvette played little part in it ? overcoming a strong first lap challenge from defending champion Amy Ruman then setting sail. The following 29 laps were clinical from Fix, constantly building a lead through the 102.81-mile race, managing the multi-class field traffic, and turning the fast lap of the race, a 2:10.816. Fix would take the checkered flag with a 19 second lead and an eight-point lead in the championship points with 273 points to Ruman’s 265.

“We’ve closed the gap over the last four races, and now we have the lead,” said Fix. “We’re just going to keep this momentum going. I sat on the pole last year at Daytona, and hopefully it will be a repeat when we get there in a couple of days. This momentum is everything, and we’re working hard to keep it all the way to the end. The team at Tony Ave Motorsports work tirelessly on our No. 50 and they know what’s at stake ? they always give me a great car, and they work their tails off. And that’s all you can ask for. I’ve got a great ride; now I just have to put my head down and give them a win.”

Amy Ruman would finish third, recovering from a late race mishap to retain a podium finish and keeping the No. 23 well within reach of Fix, setting up a final showdown between the two drivers at Daytona International Speedway with only eight points separating them heading into the finale. Simon Gregg, in the No. 59 Derhaag Motorsports Chevrolet Corvette, would finish fourth; while David Pintaric, in the No. 57 Kryderacing Cadillac CTS-V, finished fifth.

The Trans Am Series will hold an additional race yet today with the TA2 class taking to the track for an independent 102.81-mile race of their own, before heading east to Daytona International Speedway for the 2016 Trans Am Championship Finale, bringing Trans Am’s 50th Anniversary season to its conclusion on Saturday, November 12.

All results provisional until posted final.

Read the rest of the article from racer.com here: TRANS AM: Fix captures points lead with COTA win