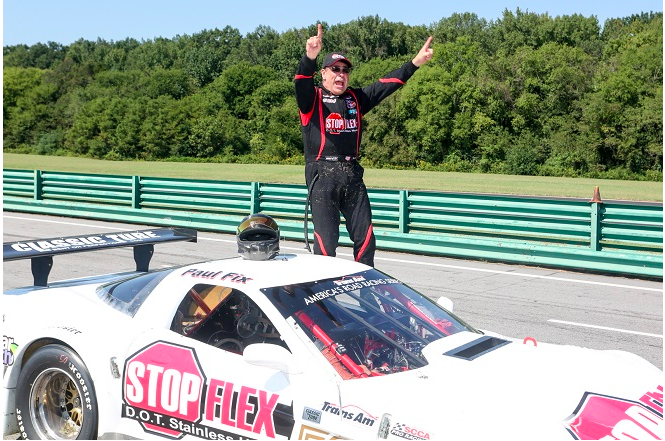 Paul Fix and Ernie Francis Jr., each had special cause for celebration today as the Trans Am Series held the first of two races at Virginia International Raceway, Round 8 of its 50th Anniversary Season.

Fix and Francis each had their own show of dominance in the TA, TA3 and TA4 multi-class race. For Fix, his third consecutive Trans Am victory on the 3.27-mile track marked an imminent return to the thick of the TA class Championship battle. For Francis, another flag-to-flag victory secured his third consecutive TA4 Championship in advance of the Series’ visit to his hometown of Miami.

Fix, in the No. 50 StopFlex.com/TheCarCoach.com/ Chevron Techron Chevrolet Corvette, began the race on pole in the TA class and was nearly untouchable throughout the vast majority of the 31-lap, 101.37-mile race, setting a new track record lap of 1:48.159 on his way to a resounding victory? his third in a row on a track on which he has seemed unbeatable.

“VIR reminds me a lot of Watkins Glen,” said Fix. “It has a great rhythm, high-speed, it’s very technical; there’s a very fine line of adhesion here especially with the new pavement?and I just excel here. Even with the addition of the new pavement, the track really suits my driving style. The guys at Ave Racing put together a great StopFlex Corvette, I couldn’t ask for a better car or better setup?we rolled off the trailer on fire. It’s all about them and my engineer putting together a world-class car this weekend.”

The victory, Fix’s third of the year, goes a long way towards his bid for the 2016 TA Class Championship, with the five drivers ahead of him in the points coming into the VIR weekend all finishing sixth or below.

“It looks like the championship is finally within our grasp,” said Fix. “This is what we were shooting for. Up until this weekend, I was thinking ‘well, we’ll roll the dice and see where everyone ends up.’ I effectively took that drama out of my head and just drove, drove, drove like it was just another race. The next four tracks are all ones I love and have done extremely well on, and we can only hope for great results there going into the end.”

The results puts Fix second in the Championship with 180 points to Ruman’s 190, while David Pintaric takes third with 179. Cliff Ebben drops to fourth with 178, while Simon Gregg completes the top five with 164.

Read the rest of the article from racer.com here: ?TRANS AM: Fix secures TA three-peat, Francis TA4 title at VIR